An abandoned wood-treating facility must undergo a Superfund cleanup. The case history and other data are presented in order to provide insight into numerical and ethical problems in this situation.

This case is suitable for a junior level fluid mechanics class, or a senior level course on ethics and professionalism.

This fictional case study involves an actual Superfund cleanup of an abandoned wood treating facility adjacent to several African American residential neighborhoods in the southeastern United States. At the heart of this study are the ethical issues involved in making decisions with insufficient data. Here, these issues are presented from three different perspectives: that of the Site Manager from the Environmental Protection Agency (EPA), who must make decisions that affect real people's lives; the regional EPA engineer who recommends policy and makes decisions guided by legislation; and an engineer working for a private consulting company contracted to excavate the contaminated soil. (His job, obviously, depends on the employer.) The case history, soil sampling data and excerpts from EPA documents are included, together with numerical as well as ethical problems.

In response to the need for more numerical problems to teach engineering ethics, in August 1995 the Texas A & M University hosted a workshop in which 38 faculty members from engineering colleges in the US and one professor from Monterrey, Mexico, gathered for one week to develop numerical problems associated with ethics cases for use in the undergraduate engineering curriculum. Details of the one week workshop, which was supported partially by the National Science Foundation, have been published in the 1996 Proceedings of ASEE Annual Conference(3) .

This paper describes one case developed at that workshop.

ETC is a former wood-treating company. The facility occupies 26 acres in an industrial area. Four African American residential neighborhoods are in the immediate vicinity. The site was first developed for creosote wood preserving in 1941; since 1963, penta-chlorophenol (PCP) had been used as a preservative at the ETC site and was the only preservative used after 1970. Manufacturing activities had not taken place at the facility since October, 1982, and the site was officially abandoned in bankruptcy proceedings during February of 1991.

The RCRA (Resource Conservation and Recovery Act) inspection report of ETC in February, 1981 showed that the wood treating facility was cited for many non-compliances, including no inspection log, no personnel training records, no groundwater monitoring, no protective covers and inspections of surface impoundments, and no inspection schedules.

In June, 1990, during remedial investigation and feasibility study (Rl/FS) of a Superfund site (the Agrico Chemical site-located 3,000 feet to the northeast of ETC), a contaminant found in the groundwater under Agrico Chemical was traced to ETC. In April, 1991, preliminary assessment began at the ETC site to determine the extent of contamination. Soil sampling using PCP as an indication of contamination is summarized in Table 1.

High concentrations of creosote, dioxin, benzene, lead and arsenic were detected on the site. No samples were collected below 8 feet. Sampling also showed creosote and PCP were detected in groundwater under the ETC property. See figure 1

Based on this sampling, EPA began soil excavation under the Emergency Removal provision of the Superfund law, which allows it to begin work without first publishing a public notice.

According to an action memo to EPA dated April, 1991, the EPA site manager for ETC requested $1.3 million, of which $1 million was for the ERCS (Emergency Removal/Corrective Service) contractor. In January, 1992, the ETC site manager wrote another memo to the regional EPA engineer requesting funding be raised to $2 million, with $1.4 million allotted for the ERCS contractor. He also reported that although approximately 54,000 cubic yards of waste sludge and soil had been excavated so far, the volume of waste material had been greatly underestimated.

By the time when excavation was finally stopped in November, 1992, $5 million (with $4.3 million for the ERCS contractor) had been spent, and approximately 260,000 cubic yards of PCP, creosote, and dioxin contaminated soil was removed and stockpiled on site. Because treating the contaminated soil would cost $43 million, which was more than twice the yearly budget for the Regional Removal Program, the stockpiled soil was wrapped in a vinyl tarp and left on the grounds of the former ETC facility see Figure 2. 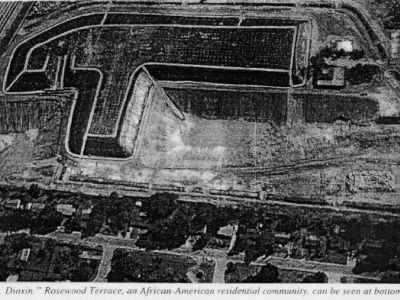 Security around the ETC site was lax, and the local newspaper reported that children were discovered using the 30foot vinyl covered "Mt. Dioxin" as a giant slide.

The neighboring residents of ETC did not know about the soil excavation until it was well on its way, releasing both contaminant-carrying dust particles and volatile chemicals into the air. The residents complained of respiratory problems as well as other health problems, such as skin rashes and fatigue. Figure 3 shows a map of the residential neighborhoods surrounding ETC and other industrial facilities.

The ETC site was not placed on the Superfund National Priority List (NPL) for cleanup until December, 1994. Presently (May, 1996) the final cleanup plan is expected to be ready by early 1997, and EPA has agreed to relocate residents of Rosewood Terrace even though contaminants from the ETC and the Agrico Superfund sites have been detected in other nearby residential neighborhoods, according to the limited number of soil samplings that have been performed see Table 2.

These problems were originally developed as part of an NSF-funded project to create numerical problems that raise ethical issues for use in engineering and other course assignments. The problems presented here have been edited slightly for clarity.

Shortage of Components
Summary
Signing Off on Drawings (adapted from NSPE Cases No. 88-5)
The Information Due to the Customer
Heat Transfer Problem