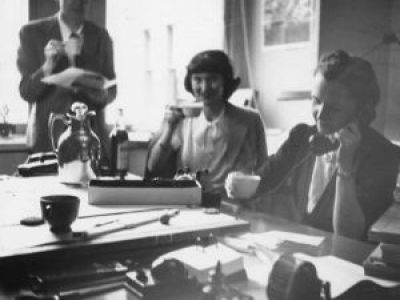 Rachel Carson and Katherine Howe sitting in Howe and S. Briggs' office. Interior, taken during the late 1940's. Photograph by Shirley Briggs. Used by permission of the Shirley Briggs Photographs and Papers in the Lear/Carson Collection at Connecticut College Library.

After her book The Sea Around Us became a best seller in September 1952, Rachel Carson was able to leave the Fish and Wildlife Service -- where she was one of a few women in high positions -- and pursue writing as her only occupation. The next book she planned to write was on human ecology.

As a scientist and a keen observer of the world around her, Rachel Carson noted in 1958 that it was pleasant to believe that much of Nature was beyond the reach of man, that God had a course for the stream of life, and Man could not interfere with it. The physical environment was to mold Life, and Life should not have the power to change drastically or destroy the physical world. Carson had these beliefs for a long time and at first refused to acknowledge that her beliefs were being threatened. But she realized she could no longer ignore what she was seeing, and she felt it was time someone wrote about the truth 1 (Graham, pp. 13-14).

Rachel Carson, sitting on a peak, watching migrating hawks through binoculars at Hawk Mountain, PA., in 1945. Photograph by Shirley Briggs. Used by permission of the Shirley Briggs Photographs and Papers in the Lear/Carson Collection at Connecticut College Library.