The story of a "born-again environmentalist" who went from commercial carpet manufacturer to world-renowned advocate for sustainable industry. 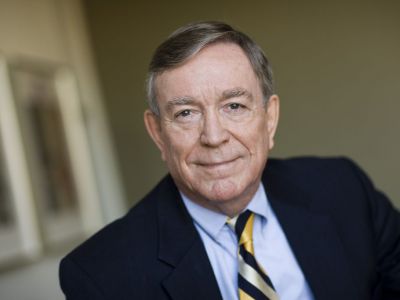 "I had a revelation about what industry is doing to our planet. I stood convicted as a plunderer of the earth. In the future, people like me will go to jail."

Ray Anderson has been called a "born-again environmentalist". He is an industrial engineer by training and is the founder, chairman, and chief operating officer of Interface, Inc., the largest commercial carpet manufacturer in the world. Anderson relates that he had never really been concerned about the environment or sustainability until he read Paul Hawken's The Ecology of Commerce in 1994 and had what he calls an "ecological epiphany," literally crying while reading the book.

Since then, Anderson has taken steps to make Interface a sustainable corporation. Currently, it practices in-house recycling, makes carpet from recycled soda bottles, and even recycles discarded carpet from other manufacturers. However, unlike some corporations with "green" programs, Anderson admits that these steps are not enough. He hopes to attain "closed-loop recycling," in which there will be no waste products or pollution produced.

Anderson has quickly become a world-renowned advocate for sustainable industry. In 1997, he was named co-chair of the President's Council on Sustainable Development. In 1999, he published a book, Mid-Course Correction: Toward a Sustainable Enterprise -- The Interface Model, about his conversion to sustainability. He now travels the world, spreading the "gospel" of sustainability with an energy and dedication reminiscent of the Baptist preachers of his Georgia childhood.

I have challenged the people of Interface to make our company the first industrial company in the whole world to attain environmental sustainability, and then to become restorative. To me, being restorative means to put back more than we take, and to do good to the Earth, not just no harm. (From Mid-Course Correction.)

If I were talking to all of you in person, I'd ask you to stand for a minute and give the person next to you a hug. I always start out my speeches that way because it's symbolic of where we are. Fellow astronauts on Spaceship Earth, we are all in this together. We all play a part in what happens to our Earth. (His statement on Amazon.com for Mid-Course Correction.)

I had a revelation about what industry is doing to our planet. I stood convicted as a plunderer of the earth...In the future, people like me will go to jail. (Fortune, May 24, 1999. Quoted from a speech at the U.S. Embassy in London.)

Building Greenworks Video
A 29-minute video from Pennsylvania's GreenWorks TV of Anderson discussing his environmental goals and the efforts at Interface to incorporate green building principles into their new structures.
Sustainable Carpet Tiles
A transcript of a 1999 radio interview with Anderson on the Australia Radio National program Earthbeat.

Articles and Information about Interface

Sustainable Growth - Interface, Inc.
An April 1998 article from FastCompany magazine. Includes some technical information about the engineering side of Interface and discusses the company's efforts toward social and environmental responsibility.
Harnessing the Sun's Rays to Make Carpet
A 1999 press release from Bentley Mills, a subsidiary of Interface, describing its photovoltaic power system. Features comments by Mr. Anderson and a high-quality photo of the solar array.