Roger Boisjoly discusses in seven sections his attempts to avert the launch of the Space Shuttle Challenger. Boisjoly has spent his entire career making well-informed decisions based on his understanding of and belief in a professional engineer's rights and responsibilities. For his honesty and integrity leading up to and directly following the shuttle disaster, he was awarded the Prize for Scientific Freedom and Responsibility by the American Association for the Advancement of Science. Includes a Quicktime Movie of the disaster and other supporting materials. 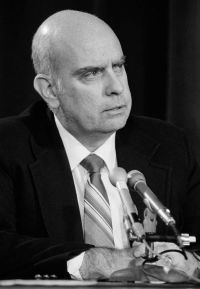 Roger Boisjoly had over a quarter-century's experience in the aerospace industry in 1985 when he became involved in an improvement effort on the O-rings which connect segments of Morton Thiokol's Solid Rocket Booster, used to bring the Space Shuttle into orbit. Boisjoly has spent his entire career making well-informed decisions based on his understanding of and belief in a professional engineer's rights and responsibilities. For his honesty and integrity leading up to and directly following the shuttle disaster, Roger Boisjoly was awarded the Prize for Scientific Freedom and Responsibility by the American Association for the Advancement of Science.

Mr. Boisjoly died of cancer in St. George, Utah on Jan. 6, 2012.  He spent his final years offering workshops and lectures on changing workplace ethics for numerous universities and civic groups.

For more information see this rememberance on NPR.

In January of 1987, nearly a full year after the Challenger exploded, Roger Boisjoly spoke at MIT about his attempts to avert the disaster during the year preceding the Challenger launch. According to the Report of the Presidential Commission on the Space Shuttle Challenger Accident, "evidence pointed to the right solid rocket booster as the source of the accident." In 1985 Boisjoly began work to improve the O-ring seals which connect segments of Morton Thiokol's solid rocket booster. Boisjoly was frustrated with the slow progress and the lack of management attention to the seal task force. He spoke about the events leading up to the disaster in this address.

Boisjoly's discussion of the Challenger Disaster is separated into seven sections. Each section is then followed by some possible responses. To see discussion of any response, click on the link to it. Supporting material is also provided. You may want to consult some of it in deciding what you would have done in Roger Boisjoly's place at each stage of the story.

I. Discovering Leaks in the Primary Seal
II. Early Evidence of a Temperature Effect
III. Being Asked to Soften the Urgency of the O-ring Problem
IV. Frustration with Lack of Management Support
V. Temperature Forecast for Challenger Flight
VI. A Management Decision Overrides a Recommendation not to Launch
VII. The Explosion of the Challenger
VIII. Supporting Material
IX.Representation and Misrepresentation: Tufte and the Morton Thiokol Engineers on the Challenger

This page and supporting pages were originally created by Jagruti S. Patel and Phil Sarin.

Roger Boisjoly presented this material first in a talk in January 1987 at MIT. The first publication was in the volume of conference papers for the 1987 Annual Meetings of the American Society of Mechanical Engineers in fall 1987.

Review of Federal Strategy for Nanotechnology - Related Environmental, Health, and Safety Research
Engineering, Social Justice, and Sustainable Community Development: Summary of a Workshop
Chechnya (1995): The Disappearance
Suspected Hazardous Waste (adapted from NSPE Case No. 92-6)
A History of the Introduction and Shut Down of Therac-25