This essay provides a summary of important events leading to the Challenger disaster. Plus, a detailed account will show why the off-line telecon caucus by Morton Thiokol Management constituted the unethical decision-making forum which ultimately produced the management decision to launch Challenger without any restrictions.

A background summary of important events leading to the Challenger disaster will be presented starting with January, 1985, plus the specifics of the telecon meeting held the night prior to the launch at which the attempt was made to stop the launch by the Morton Thiokol engineers. A detailed account will show why the off-line telecon caucus by Morton Thiokol Management constituted the unethical decision-making forum which ultimately produced the management decision to launch Challenger without any restrictions.

The paper will continue with the post-disaster chronology of my working relationship with Morton Thiokol Management and conclude with a discussion on accountability, professional responsibility and ethical conduct which should be practiced in the work place, plus statements from the academic community about the plight of whistleblowers and my closing remarks.

You may have already concluded that the Challenger disaster was the result of only the decisions made during the evening prior to and the day of launch. As a senior engineer involved with the SRM's since July, 1980, and specifically with the joints since 1981, I can make the following statements from personal observations.

The SRM Program at MTI was suffering from the lack of proper original development work and some may argue that sufficient funds or schedule were not available and that may be so, but MTI contracted for that condition. The Shuttle program was declared operational by NASA after the fourth flight, but the technical problems in producing and maintaining the reusable boosters were escalating rapidly as the program matured, instead of decreasing as one would normally expect. Many opportunities were available to structure the work force for corrective action, but the MTI Management style would not let anything compete or interfere with the production and shipping of boosters. The result was a program which gave the appearance of being controlled while actually collapsing from within due to excessive technical and manufacturing problems as time increased.

This paper starts with January, 1985, which was the period of gross escalation of joint seal problems and continues with specific events that should have signaled either stopping the flights or as a minimum, changing the launch commit criteria to prevent launching below 53 °F (12 °C).

Figure 1 shows the SRM joint configuration for purposes of this discussion. 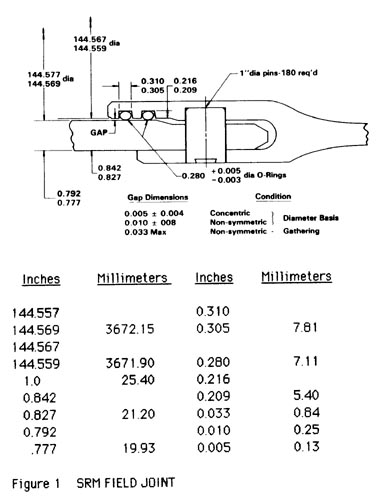 All dimensions are in inches with SI units for nominals given in the supplementary table. The first O-ring to seal internal hot gases is called the primary seal while the other is termed the secondary seal. There are 177 load carrying pins plus three locating pins for assembly clocking. Pressurization of the motor to 1004 psi (6.92 x 106 pascals) causes the gap dimension to increase 0.042 inches (1.07 mm).